By National Congress of American Indians 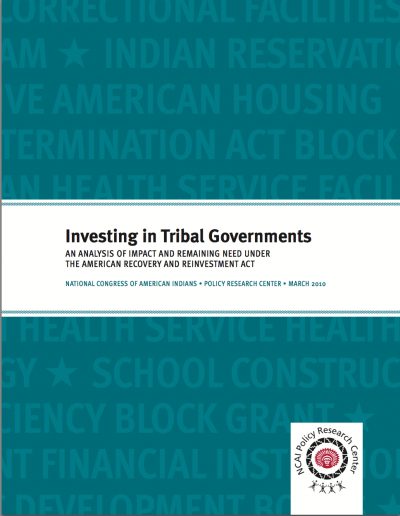 Investments in tribal governments support policy innovations that can be, and have been, replicated to deal with some of America’s toughest economic problems. The data presented in this report demonstrate that it is both essential and mutually beneficial for the federal government to partner with tribes to address the economic challenges facing communities throughout the United States.

In many Native communities, economic crisis is not an occasional disaster; it is a daily reality.

Tribal investments in infrastructure and use of available federal tools have achieved some economic success.

Lack of reliable data to guide policymaking at the federal, tribal and state level poses an almost insurmountable challenge to effective economic recovery in Indian Country.

Economic development in Indian Country lags behind the rest of the nation and impacts nearly every aspect of reservation life. For generations, our communities have faced economic conditions that are even more pronounced than those of the current economic crisis. Eight of the 10 poorest counties in America are home to Indian reservations.

The detailed analysis in the previous section has underscored the following three critical observations: 1) structural changes need to be made to provide tribes with access to federal investments; 2) the administration needs to engage directly and regularly with tribal leaders; and 3) policymakers need data to guide Native communities to a prosperous economic future.