Insights From the Annual Results Reports 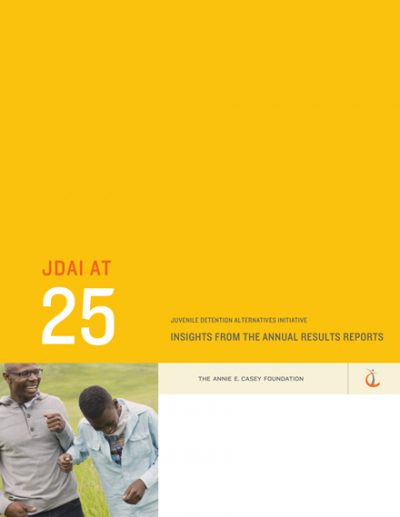 The Annie E. Casey Foundation launched its Juvenile Detention Alternatives Initiative (JDAI) 25 years ago. This results report, which draws on eight years of JDAI data, tells how participating sites have achieved significant and — in many cases — long-lasting reductions in rates of juvenile incarceration and juvenile crime.

Readers will also learn what’s next. The report shares key challenges and also new goals, tools and strategies for JDAI sites to consider as they look to enhance their work and advance the initiative’s remarkable track record of success.

Overall Reductions in Incarceration have been Sustained or Deepened

JDAI cut admissions to juvenile detention facilities in half — by about 90,000 admissions per year.

In 2016, nearly 130 sites reported that juvenile crime had fallen well below pre-JDAI levels — a reduction of more than 40%, on average, across all indicators evaluated.

JDAI has always emphasized the critical importance of data-driven policies and decision making as a core element of detention reform.

The results reports also show that important challenges remain, including the persistence of racial and ethnic disparities and loss of detention reform momentum in some sites, characterized by rising lengths of stay.