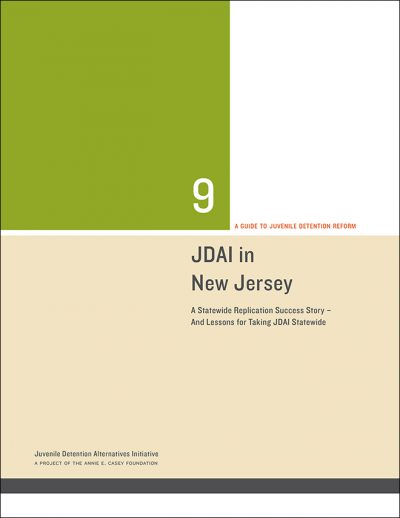 This report documents New Jersey’s success in replicating the Juvenile Detention Alternatives Initiative model and highlights the importance of state leadership to progress. It also identifies key ingredients in New Jersey’s approach and draws lessons from the state that might benefit other jurisdictions looking to take JDAI to scale.

As of early 2014, JDAI was active in 18 of the New Jersey’s 21 counties, and the remaining three counties are expected to join JDAI by 2015.

In addition to reducing the number of youth held in local detention centers awaiting court or pending placement, New Jersey JDAI sites have reduced the number of youth they commit to state custody. Prior to launching JDAI, participating counties committed 1,037 youth to state custody. In 2013, these same counties committed just 301 youth, a 71% drop.

Significant gains for Youth of Color

Youth of color in New Jersey have reaped substantial benefit from JDAI. As of 2013, average daily population of youth of color in detention fell 60% in JDAI counties (from 740 pre-JDAI to 300 in 2013).

Boiled down, New Jersey’s progress can be chalked up to three factors. First was determined leadership. Second was timing — achieving excellence in initial sites before spreading the model to other jurisdictions. Third was the development of a sturdy infrastructure to support local implementation efforts, promote replication and sustain momentum over the long haul.

Fortunately, the leadership challenge facing states seeking to promote JDAI replication today are not nearly so steep as those New Jersey confronted a decade ago. New Jersey’s success is now a matter of record, and New Jersey is firmly entrenched as a model for state-level leadership on JDAI. A pathway to progress has been blazed.