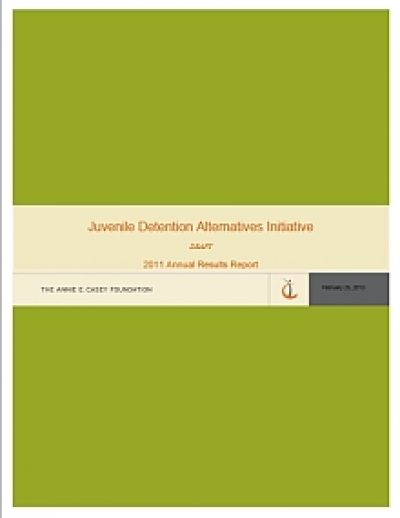 The Juvenile Detention Alternatives Initiative (JDAI) is a nationwide effort initiated by Casey to eliminate unnecessary and inappropriate jail time for juveniles. This JDAI report deepens understanding of the overall impact, influence and leverage of the initiative and provides data about emerging trends in detention reform.

JDAI sites are detaining 41% fewer youth on an average day in 2011 than they did prior to implementing JDAI reforms.

Reported information suggests that in 2011 JDAI sites secured funding far in excess of the grants they received from the Foundation.

More than half of the reduction in detention admissions occurred among kids of color.

Begun in 1998, JDAI has grown into the most widely replicated juvenile justice initiative in the United States..

This summary of the 2011 JDAI annual results depicts an initiative that has accomplished a great deal, and still has much left to accomplish. It documents the progress that JDAI sites have made in reducing their reliance on secure detention and advancing detention reform; and it also shows that sites continue to grapple with challenges in several areas of performance, most notably the stubborn persistence of racial and ethnic disparities in the use of detention

Research has shown that when a youth is detained in the period before the disposition of his or her case, even when controlling for other factors, the youth is much more likely to be ordered into an out-of-home placement.. As documented in AECF’s publication, No Place for Kids: The Case for Reducing Juvenile Incarceration, these placements, which typically involve committing the youth to the custody of a state agency, tend to be extremely costly, unsafe, developmentally inappropriate (especially for youth who have not participated in any serious delinquent behavior), damaging to family and community ties, and ineffective in reducing recidivism or improving prospects for a successful transition to adulthood.