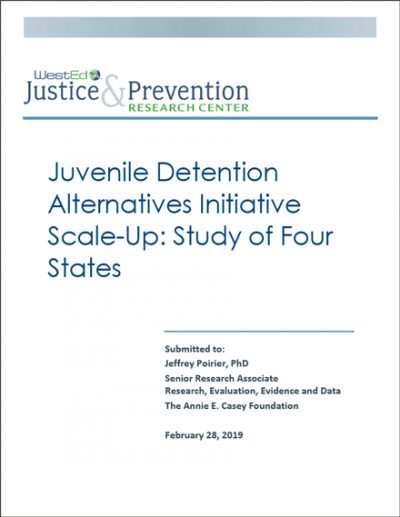 In this Report on Scaling Up JDAI, You'll Learn

This document examines how Indiana, Massachusetts, Missouri and New Mexico have expanded the Juvenile Detention Alternatives Initiative® (JDAI) to more counties within their states. Stakeholders from the four states reflect on this work and offer peers in other states advice on scaling up JDAI®. Their recommendations include building buy-in at the state and local levels and involving judiciary leadership early, since judges can be particularly effective in advancing JDAI’s goals.

A deeper understanding of what it takes to grow JDAI

Staff turnover was a significant challenge — one that set sites back as they worked to replace and train newcomers.

Data-driven decision making is one of the eight core JDAI strategies. To support this strategy, states should plan out their data collection, management and use at the beginning of their scale-up efforts.

Interviewees and survey respondents in all four states reported positive outcomes from JDAI on many levels, from declines in the use of juvenile detention to new collaborations and shifts in attitude that have the potential for wider effects on juvenile justice policies and practices.

One factor that has supported scale-up in multiple states is the presence of a local champion of JDAI, such as a judge, to help spread the word and motivate counties and cities to be part of the reform efforts.