A Preprint for AdvoCasey Fall/Winter 1999 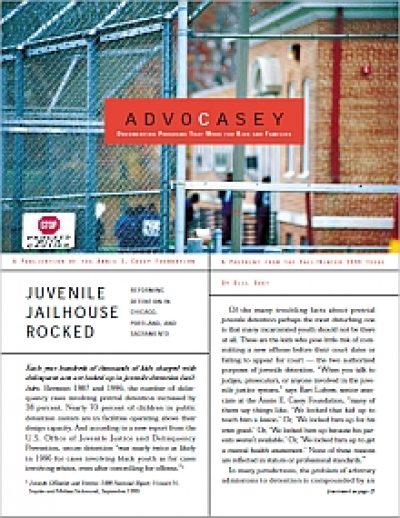 Unnecessary lock up of kids is detrimental for the kids, the families and the taxpayers. When Bart Lubow and the Casey Foundation looked at the juvenile detention field in the early 1990s, it was obvious that critical reforms were well overdue.  Readers will find in this article a hardcore look at juvenile detention reality before and after Casey launched its Juvenile Detention Alternatives Initiative (JDAI) through the eyes of grantees and Foundation staff.

No Risk, No Bars

Many incarcerated youth should not be locked up as they do not pose a risk to themselves or society.

Reforming detention systems has proven very difficult due to their politically explosive nature.

JDAI achieved significant reductions in detention admissions and significant improvements in the conditions of confinement.

There is no one juvenile justice system, just a labyrinth of autonomous agencies needing to collaborate with separate cultures and record keeping systems.

Secure detention has been used as a dumping ground by overburdened mental health and child welfare systems.

The kinds of treatment kids get in detention can have an impact on them for a very long period of time, either positively or negatively…There are situations where they have gotten into educational programs that may be the best they have ever had.

When you talk to judges, prosecutors, or anyone involved in the juvenile justice system many of them say things like, ‘We locked that kid up to teach him a lesson.’ Or, ‘We locked him up for his own good.’