By The Brookings Institution 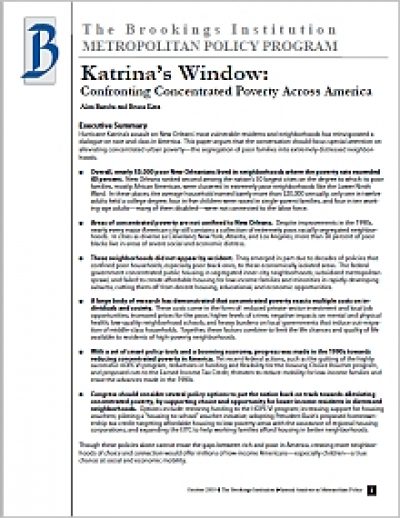 Hurricane Katrina’s assault on New Orleans’ most vulnerable residents and neighborhoods reinvigorated a dialogue on race and class in America. This paper argues that the conversation should focus special attention on alleviating concentrated urban poverty—the segregation of poor families into extremely distressed neighborhoods—and cultivate policies that create neighborhoods of choice and connection.

Location matters when trying to climb out of poverty

At the time of Katrina, nearly 50,000 poor New Orleanians lived in neighborhoods where the poverty rate exceeded 40%.

African Americans made up 67% of the city’s total population at the time of this report, yet 84% of them lived below the poverty line.

During this time in New Orleans there were just 133 white out-of-school, out-of-work young men and women, and more than 3,700 blacks in the same situation.

Of the nearly 8 million people living in extreme-poverty neighborhoods in 2000, roughly 75% lived in big cities.

Neighborhoods of connection link families to opportunity, wherever it may be located. They offer connections to good schools and recognize that the shifting geography of employment demands improved mobility for workers to access good jobs.