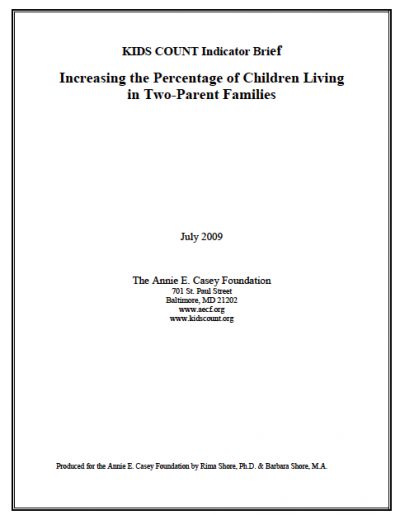 There are numerous economic and social benefits associated with two-parent households that contribute to children's well-being. This brief outlines four strategies for increasing the percentage of children living with two parents.

The rate of children living in single parent households has tripled since 1970.

In 2007, nearly 1/3 of single-parent families had incomes below the federal poverty line, compared to 6% of married families.

Parents raising children together tend to have more money, more flexibility and more time to supervise their children, offer emotional support, take an active part in their education and arrange other activities for them. In contrast, one-parent families are more likely to experience economic hardship and stressful living conditions—including fewer resources, more frequent moves and less stability—that take a toll on adults and children alike.