By The Annie E. Casey Foundation 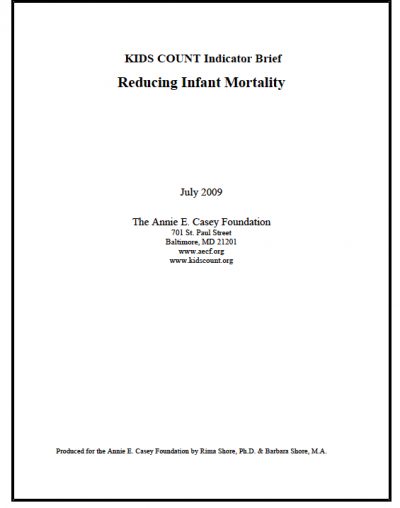 While infant mortality in this country has declined dramatically over the last 50 years, the U.S. has lagged behind other industrialized nations in its progress toward reducing the number of deaths compared to live births. This brief outlines four strategies for reducing the infant mortality rate in the U.S. and improving newborns’ health during the first year of life.

In 2005, about two-thirds of all infant deaths occurred during the first month of life.

Public information campaigns helped increase breastfeeding rates among African Americans by 29% from 1994 to 2006.

According to a 2006 study, half of all pregnancies are unplanned, with rates higher for African Americans and Hispanics.

Sudden Infant Death Syndrom (SIDS) is the leading cause of death for babies during the first year of life.

In short, despite the wide range of expertise that has been brought to bear on reducing infant mortality across the nation, the first year of life remains a time of considerable risk for many babies. Although the U.S. spends more on health care than any other country, our infant mortality rate remains higher than that of most other industrialized nations.

Because prevention efforts have not achieved the hoped-for results, researchers and policymakers have begun to shift from a narrow focus on prenatal and infant care to a broader emphasis on women’s health. A recent report from Trust for America’s Health asserts that widespread chronic disease epidemics such as obesity and diabetes are taking a toll on America’s infants, especially those who are African American, urban and poor.