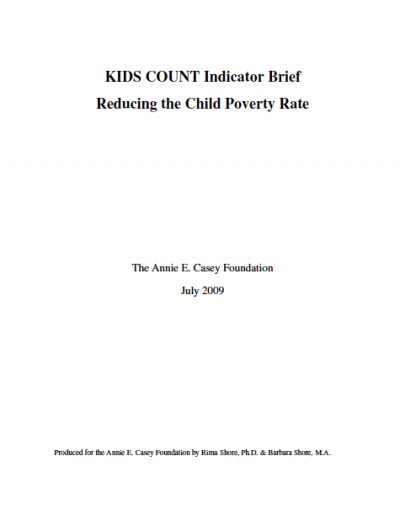 The number of children in the US whose families have incomes at or below the federal poverty line is on the rise. This brief outlines five strategies for moving families out of poverty and toward financial stability.

African American and American Indian children are three times as likely to live in poverty as white children.

The child poverty rate increased by nearly 15% from 2000 to 2007, with 13.1 million children living below the federal poverty line.

Of all low-income families, 64% had at least one parent who was unemployed for more than six months.

There is now broad consensus among researchers that the federal poverty line is set too low, and that even families with incomes that are twice the poverty line struggle to make ends meet and should be considered “low-income.” By this standard, 39 percent of children are economically disadvantaged by virtue of living in low-income households.

Child poverty has been so persistent—in both good and bad economic times—that many Americans believe it is inevitable. But we can do better. History shows that well considered, sustained policy efforts can buffer many children from the worst effects of poverty. We have seen other Western industrialized countries make significant strides in cutting their child poverty rates.