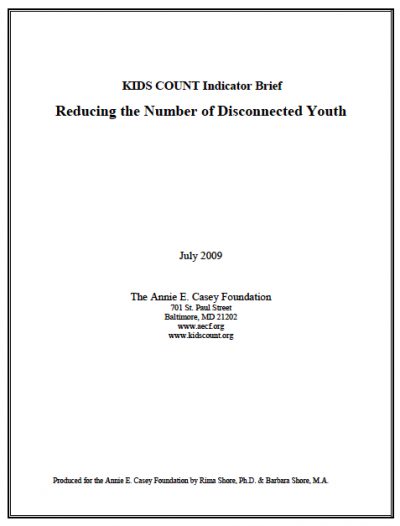 This brief outlines five strategies for reducing the number of youth who are disconnected from the skills, supports, resources, opportunities and relationships they need to succeed.

Of students reported missing at least one day of school in the previous month, 5% said the absence was due to feeling unsafe at school or on their way to or from school.

There are tens of thousands of rural, urban and suburban neighborhoods in America, but many of the worst outcomes for young people are concentrated in several hundred of our most isolated, tough neighborhoods. In these neighborhoods, youth inactivity and unemployment are often caused or aggravated by a web of related problems—family problems, poor education, inadequate health care, fragmented social services, racism and crime.

For at-risk students to become invested in learning, the payoff to learning must become clearer and more realistic. School-to-career programs can serve this purpose. These programs can help students acquire the informal skills needed to succeed in the workplace, including the attitudes and work habits employers require.