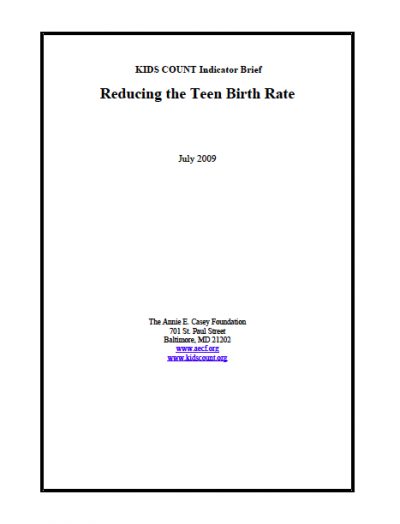 Teens who become parents, and the children they bear, are more likely to experience poverty, poor health, abuse and neglect and other adverse effects that impact them throughout their lives. This brief outlines six strategies to help prevent teen pregnancy.

Of teens participating in an annual survey, 47% indicated that their parents have the strongest influence on the decisions they make regarding sex.

82,000 babies--nearly 20% of births to teenagers--were born to teens who already had at least one child.

Without contraception, a sexually active teen has a 90% chance of becoming pregnant within a year.

Compared to women who postpone childbearing until they are older, teenage mothers are more likely to drop out of school and to live in poverty. At the same time, their babies are more likely than other children to be born at a low birth weight, face health problems and developmental delays, perform poorly in school and experience abuse or neglect.

Like young women, young men are vulnerable to poor outcomes when they create unwanted or too-early pregnancies. Today, there is widespread recognition that efforts to combat teen pregnancy need to focus on both sexes. Most states now sponsor one or more initiatives to help prevent unwanted or too-early fatherhood.