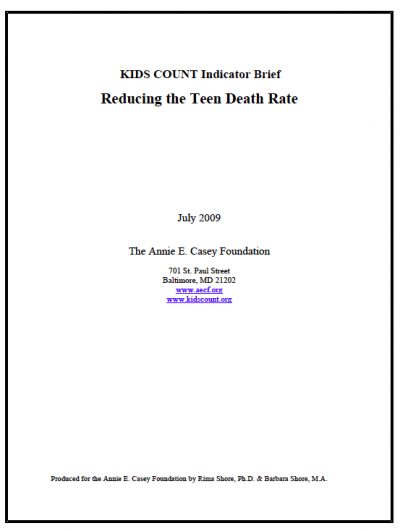 While the rate of teen deaths in the U.S. has declined significantly in the last decade, it is still higher than in many industrialized countries, particularly among the three highest causes of teen death. This brief outlines several strategies for reducing the teen death rate in the U.S.

Teen boys age 16-19 are four times more likely to be involved in a car accident than older drivers, per mile driven.

In 2006, 60% of teens and young adults involved in fatal car accidents were not wearing seatbelts.

Nearly 2,300 teen deaths in 2006 were due to homicide, with higher rates among non-white teens.

Suicide is the third leading cause of death of teens age 15-19; male teens are four times as likely to commit suicide as female teens.

To be sure, reducing the teen death rate will require strategies that make accidents and excess less likely. Complicating the challenge is a wide gap between the realities of teens and the perceptions of adults – who grossly underestimate adolescents’ risk-taking behaviors.

For many years, researchers have sought to understand why some teens manage to stay healthy and avoid high-risk behaviors in circumstances where many of their peers do not. They have examined not only risk factors, but also protective factors, taking into account many kinds of influences--genetic, biological and environmental. Increasingly, this resilience framework has been used to develop preventive strategies, including family-strengthening approaches.