A Guide to Juvenile Detention Reform #11 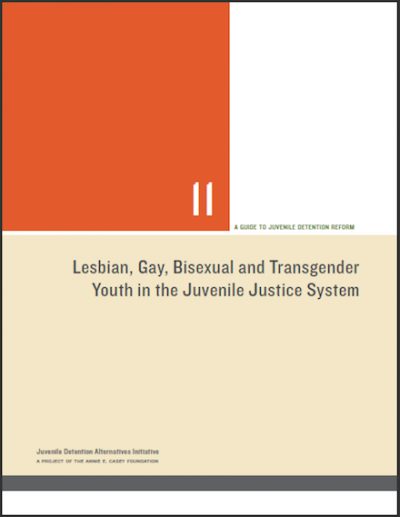 This guide highlights a wide range of best practices – everything from big picture improvements to frontline fixes – that juvenile justice facilities can implement to advance the safety and well-being of a particularly vulnerable population: Lesbian, gay, bisexual and transgender (LGBT) youth.

It is the eleventh installment in a series devoted to the Casey Foundation’s Juvenile Detention Alternatives Initiative (JDAI). A multi-year, multi-site project, JDAI aims to reduce reliance on secure confinement while championing more efficient and effective detention alternatives.

When it comes to serving LGBT youth, knowledge and acknowledgement are key

Youth in detention and correctional settings who identify as lesbian, gay, bisexual or other report being sexually victimized by peers at a rate that is nearly 10 times higher than their heterosexual counterparts.

About 8% of all youth and 20% of detained youth identify as lesbian, gay, bisexual, questioning, transgender and gender non-confirming.

And the Survey Says…

Misinformation and bias have long subjected LGBT youth to unfair and unlawful treatment, including identity-based criminalization, unwarranted and prolonged incarceration and verbal, physical and sexual abuse.

There is an urgent need to immediately begin the process of creating systems in which all young people, irrespective of sexuality and gender, are treated with fairness and respect.