Listening to Black Women and Girls

By The Georgetown Law Center on Poverty and Inequality 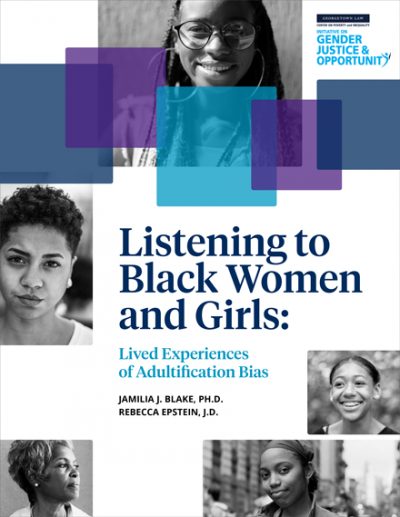 In This Report on Adultification Bias Against Black Girls, You'll Learn

This report by the Georgetown Law Center on Poverty and Inequality shares insights and recommendations garnered from focus groups with black girls and women. The topic? Adultification bias.

What is adultification bias? It is the perception that black girls are less innocent and more adult-like than their white peers of the same age. This publication follows a 2017 report by the same researchers, called Girlhood Interrupted, that examined the quantitative ramifications of adultification bias.

The goal was to measure participants’ responses to our adultification findings by asking them about their real-world observations and seeking their insights about solutions to overcome this bias, as well as directions for future research. To that end, participants were asked whether the results of the original study align with their lived experiences and whether they believe the findings presented in the Girlhood Interrupted report would contribute to meaningful change. Researchers also examined what new research questions they should ask to deepen their understanding of the adultification bias faced by black girls, and what is most needed to address that bias.

In response, participants supported the finding that black girls experience adultification bias. Further, they suggested several related factors that contribute to that bias, including the role played by negative stereotypes of Black women, as well as racism, sexism, and poverty. This report highlights the key findings.

Among focus participants, the concept of adultification bias was far from novel

The perceived divide between black and white girls appears as early as age 5 — with adults viewing young black girls as “less innocent” than their white peers.

Improved cultural competency can help educators better address their own bias and cultural inexperience while gaining a better understanding of black girls.

In the eyes of many participants, white girls are seen as more innocent and vulnerable and elicit a more protective response.

The focus groups provided key validation of our initial research findings, rooting our survey of adultification bias in the context of lived experience.