By Community Science and the Annie E Casey Foundation 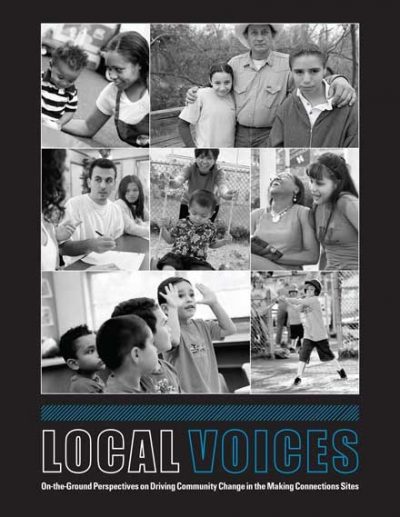 This report describes, from the perspective of local stakeholders, the experience of several sites involved in Making Connections — the Foundation’s signature community change initiative of the 2000s — in developing and enhancing the core capacities essential for articulating and pursuing a local community change agenda. The report describes the conditions in the communities when Making Connections began; the core capacities built during the decade-long initiative; the factors that contributed to capacity building; the evidence of improved outcomes for children, families and neighborhoods resulting from the enhanced change capacities; the continuing challenges of sustaining those capacities; and key takeaways from the experience.

Growing the Capacity for Change

All 19 local stakeholders (from the seven former Making Connections sites) who were interviewed for the study reported that their community’s overall capacity to articulate and implement a community-level change agenda and to achieve results had improved during the 10-year period of Making Connections.

Connecting Communities to Tools and Training

The 19 stakeholders identified the training and support provided by the Casey Foundation over the course of Making Connections as the most important factors contributing to the increases in capacity achieved. Specifically, the local stakeholders emphasized the information on best practices and tools and the leadership training provided by Casey.

The Complex Story of Change

The vast majority of the interviewed local stakeholders were able to provide concrete examples of what they reported as improved outcomes for children, families and neighborhoods that they felt had been fostered by the improved core change capacities. The examples covered a wide range of substantive areas. However, none of the local informants was able to provide evidence that their communities had yet been able to move the needle relative to population-level outcomes in the target neighborhoods, even with their enhanced core capacities.

The Results-Based Accountability work that Casey brought … it became embedded in the city and leadership-in-action work around family economic success issues. From that, a number of [other] data [activities] arose. Universities and other groups with data capacities have started to play a bigger role and are sharing data….In the public sector, [officials] are making decisions based on data. They’re looking at what the status of the population is and what an effective intervention would be.

There’s a legacy from Making Connections…that’s very much alive and now part of the culture in Louisville: the whole idea of resident engagement and resident voice…engaging residents in an ongoing way to guide neighborhood development. That value is incorporated into the community, into how we function and work. I don’t think you could do a significant reinvestment effort [now] without the community’s voice being engaged and involved.