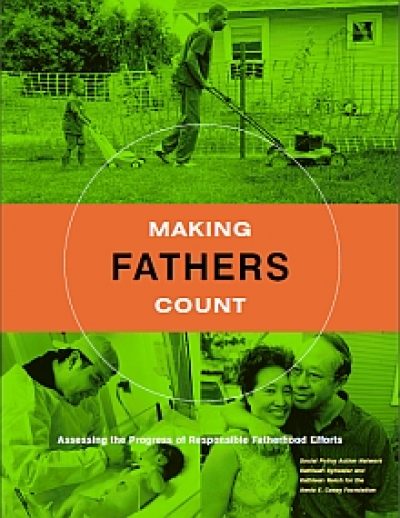 Fathers matter when it comes to the success of their children and the economy of the United States. With the fatherhood movement at a crossroads in the early 2000s, it seemed a good time to assess what the emerging fatherhood field had accomplished to date and to identify the challenges that remain. This paper traces the history of the fatherhood field, reviews its achievements thus far and identifies specific areas in need of further efforts. To truly understand the issue, this report asserts that fathers themselves need to be involved in the research and solutions.

When children grow up without caring and committed fathers in their lives, they are more likely to grow up in poverty.

A growing concern in the early 1990s was inner-city black men who could not find work as these men were unlikely to support their families or to marry. Joblessness is a major obstacle to family formation and father involvement.

Children raised without fathers at home are more likely to perform poorly in school; develop emotional problems; engage in risky behaviors such as early sexual activity and drug and alcohol abuse; and experience violence as children.

Children with fathers or close relationships with adult males have higher self-esteem, are better learners and are less likely to be depressed.

With the influx of philanthropic funding in the 1990s, new fatherhood groups were able to continue educating policymakers about fatherhood issues and the federal government began to pay increasing attention to fathers.

While the debate over marriage attracts the most attention, domestic violence is by far the more serious obstacle facing the fatherhood field.

The field itself is so divisive that no common agenda, dominent leaders or final solutions have emerged at the time of this report.

Ralph Smith remembers the early days at the Philadelphia Children’s Network, “Folks literally laughed out loud when we said we would focus on fathers. In that era of ‘deadbeat dads’ neither the men themselves nor their issues were deemed worthy of time or attention. Things have changed in the past decade.”

In August 1993, a group of prominent thinkers with Republican connections… gathered to discuss family breakdown. “… the growing absence of fathers was the most consequential trend in the culture —for families and for civil society...” To help reverse the trend, (Don) Eberly and (Wade) Horn founded the National Fatherhood Initiative (NFI).

In 2002, the field faces serious and unresolved questions about how to deal with such basic issues as domestic violence and gender equity. And on a fundamental level, proposed government support for fatherhood activities raises core questions about whether—and how—government should become involved in the lives of families.

In an era of increasing public demand for measurable outcomes, no large scale responsible fatherhood demonstration has shown conclusive evidence that it improves the lives of children whose fathers have participated.