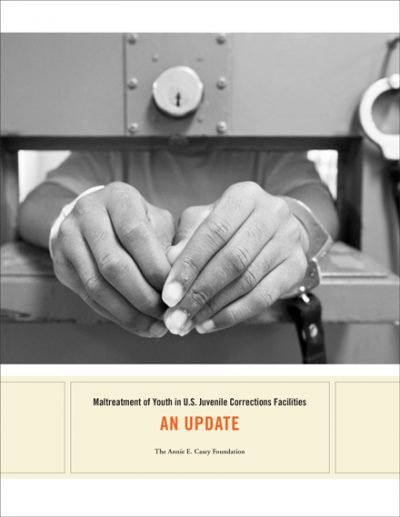 This report, released as a follow-up to No Place for Kids, introduces new evidence on the widespread maltreatment of youth in state-funded juvenile corrections facilities. It tells of high rates of sexual victimization, the heavy-handed use of disciplinary isolation and a growing roster of states where confined youth have been subject to widespread abuse. The four-year update is in — and the news on violence in juvenile detention centers is not good.

The More You Look...

If researchers extend their inquiry back to 1970, they find systemic mistreatment of confined youth in 43 states plus the District of Columbia and Puerto Rico.

Nearly 10% of youth in state juvenile corrections facilitieis report being victimized sexually, according to a survey from the Bureau of Justice Statistics.

In 2012, youth confined in Ohio Department of Youth Services facilities spent nearly 200,000 hours in seclusion — an average of 358 hours per person.

The juvenile justice field must: 1) minimize the use of confinement for court-involved youth; and 2) abandon the traditional youth prison model when confinement is truly necessary.

Georgia's juvenile corrections facilities have the highest sexual abuse rates in the country according to a 2013 federal study. Equally awful: The system is home to 140 unresolved cases of alleged sexual abuse and harrassment.

In 2014, a judge ordered all youth removed from the Nevada Youth Training Center. Why? Staff were hog-tying the kids in their care.

An 80-bed, state-run juvenile corrections facility in Colorado documented 139 assaults in 2013, including 16 violent attacks. That same year, police were called to the facility 21 times to investigate alleged assaults.

In its 2011 report, No Place for Kids: The Case for Reducing Juvenile Incarceration , the Annie E. Casey Foundation demonstrated that America’s heavy reliance on juvenile incarceration is a failed strategy for addressing youth crime.

The troubling evidence presented in this report should remove any remaining doubt that large conventional juvenile corrections facilities — or plainly stated, youth prisons — are inherently prone to abuse.