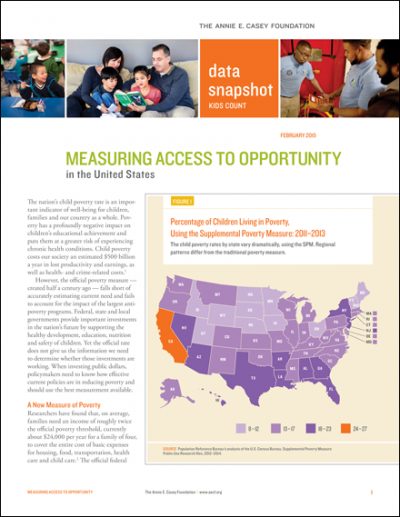 This KIDS COUNT data snapshot illustrates how outdated methods measuring poverty in the United States are giving an inaccurate picture of how families are really faring and what public programs are actually working. The brief introduces the more accurate Supplemental Poverty Measure (SPM) and shows how government programs affect state poverty rates. Recommendations on targeting families in need give policymakers input on implementing efficient and cost-effective public programs.

The Supplemental Poverty Measure (SPM) shows the effectiveness of government programs in helping the poor. The data show that without any government interventions the child poverty rate would nearly double, from 18% to 33%.

The official poverty measure was created half a century ago and fails to accurately estimate current need.

Using the Supplemental Poverty Measure, California has the highest child poverty rate among states, followed by Arizona and Nevada.

On average, families of 4 need an income of roughly twice the official annual poverty threshold of $24,000 to cover the entire cost of basic expenses: housing, food, transportation, health care and child care.

The Supplemental Poverty Measure created in 2011 shows that the rate of children in poverty has declined since 1990 while the official measure shows no real change.

Federal, state and local governments provide important investments in the nation’s future by supporting the healthy development, education, nutrition and safety of children. Yet the official [poverty] rate does not give us the information we need to determine whether those investments are working.

The SPM is a powerful tool that more accurately tracks progress in ensuring children’s access to opportunity....the SPM can help decision makers better focus on the millions of children still growing up in families without sufficient economic resources.