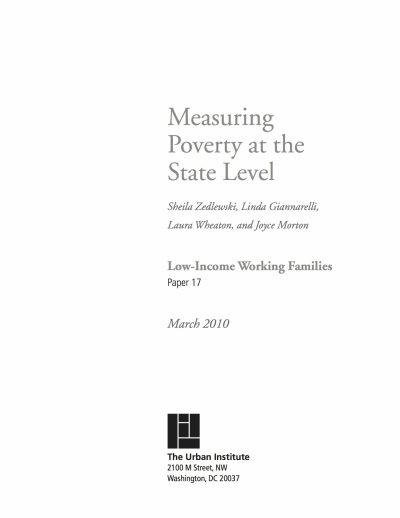 This report looks at the results of implementing a poverty measure for Minnesota using the American Community Survey (ACS) – including the benefits, challenges and implications of this poverty benchmark. The report further describes the potential effects of alternative safety-net policies on poverty.

In 2006, 9.8% of the Minnesota population was poor, according to the NAS definition.

While the poverty gaps are generally similar between the official and NAS measures, the gap for families with children is much lower using NAS.

Poverty in Minnesota drops to 9.2% with greater participation in the Supplemental Nutrition Assistance Program.

Most state commissions quickly recognize the need for a benchmark that would allow them to track progress in reducing poverty and to test the effects of different policy proposals on poverty reduction. Such a benchmark would incorporate all components of family resources as well as an up-to-date measure of family needs in their state.

It is important to know how relative poverty rates change given different assumptions such as geographic variation in thresholds and treatment of home value and out-of-pocket health spending.