Racial and Ethnic Change in Metro America in the 2000s 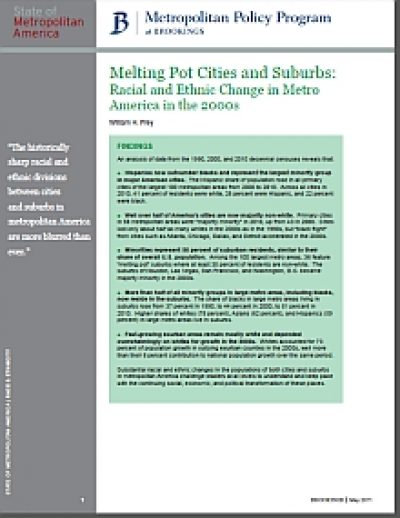 The historically sharp racial and ethnic division between cities and suburbs are more blurred than ever. As minorities become the majority in many cities and many suburbs grow in diversity, government leaders are trying to keep up with the challenge of change. This report examines these “melting pot” trends through the lens of the nation’s 100 largest metropolitan areas, based on results from the 2010 Census.

Well over half of America’s cities are now majority non-white.

More than half of all minority groups in large metro areas now reside in the suburbs.

Substantial racial and ethnic changes in the populations of both cities and suburbs in metropolitan America challenge leaders at all levels to understand and keep pace with the continuing social, economic, and political transformation of these places.

Black-white segregation is now falling gradually but consistently across metropolitan areas, with growing Southern and Western parts of the country registering the lowest levels of segregation.