Insights from the Ready4Work Reentry Initiative 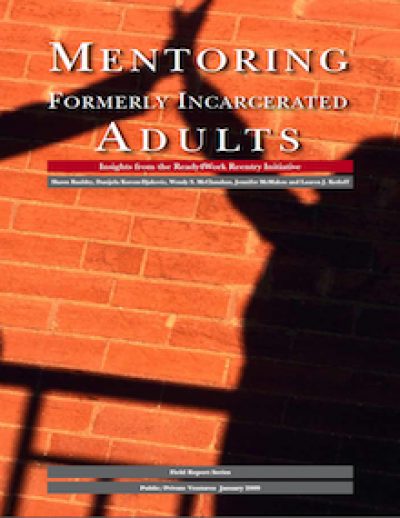 This report tells how the Ready4Work program, which aims to ease an ex-prisoner’s transition home, added a mentoring component to its suite of reentry support services. Readers will learn how 11 sites packaged this new component, who participated and what initial outcomes say about mentoring’s capacity for impacting the lives of former inmates (hint: it’s all positive — and worthy of a deeper look!).

More research is needed, but the initial verdict is in — and mentoring does make a difference

In the United Sates, the number of men and women behind bars has skyrocketed. One in every 100 adults is incarcerated and more than 650,000 prisoners are released each year. Without strong and consistent reentry supports to help ex-inmates transition home, the social and financial costs of incarceration seem destined to mount.

Without access to social supports, community resources and stable employment upon release, an ex-prisoner’s chance of re-offending rises. In fact, some 25% of former inmates return to prison within three years; another 25% end up in custody for violating the terms of their probation or parole.

A Program for Life After Prison

Ready4Work offers newly released inmates traditional employment and training services as well as wraparound social services, such as mentoring, drug rehabilitation and housing assistance. The program’s goal? Reduce an ex-prisoner’s chance of reoffending while addressing any major hurdles that may arise during his or her transition home.

Adding Mentoring Into the Mix

The reason for incorporating mentoring into Ready4Work’s service lineup was simple. Staff believed that the added support of a caring adult might help ease an ex-prisoner’s reentry into society. All 11 sites designed their own mentoring models and opted to connect with former inmates via group meetings, one-on-one sessions or a combination of both strategies.

Next Steps to Note

This report concludes with a charge to continue studying the impact of mentoring on reentry success. Some questions to explore include: Which mentor-participant pairings fare best, how long should the ideal match last, and how much program oversight and mentor training are necessary. In addition, experts say advocates must work to make mentoring more attractive to ex-prisoners — especially young males.

Only 6.9% of Ready4Work enrollees ended up back in prison within a year of their release. This rate of return bests the national average of 10.4%. Another statistical success worth noting: Nearly 60% of Ready4Work’s 4,500 participants found a job while in the program.

Ready4Work participants were less likely to enroll in the program’s mentoring component if they were younger, mothers, or if they reported not being very religious. Three factors — ethnicity, education level and criminal history — played no role in an ex-prisoner’s willingness to meet with a mentor.

Today, the percentage of Americans in prisons is five times higher than it was three decades ago.

Prior to the Ready4Work demonstration, very few programs for formerly incarcerated individuals had ever tried mentoring as a program service, and none had evaluated the impact of mentoring.