By The Urban Institute, The Annie E. Casey Foundation 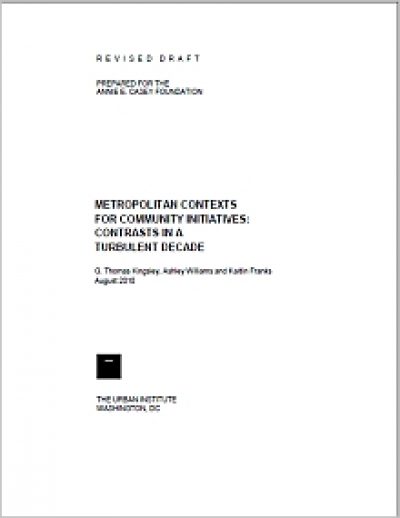 Community planners recognize that conditions in their metropolitan areas have a powerful influence on what they can accomplish at the neighborhood level. This report highlights the 14 metros that were the focus for investment by the Annie E. Casey Foundation in the 2000s. These 14 represent the diversity across America’s large metropolitan areas. The report is organized into three sections. Section 1 introduces the 14 Casey metros using background indicators (e.g., on demographic conditions, social conditions and poverty levels). Section 2 examines the dynamics of the economies of these metropolitan areas since 2000, and Section 3 does the same for their housing markets.

Child Poverty is a diverse factor in all Making Connections Cities

After increasing at an unprecedented annual rate of almost 10% from 2000 to 2006, the housing price index for San Francisco/Oakland had one of the sharpest declines from 2006 to 2010, over 10% per year.

Washington, DC and Baltimore, MD suffered the worst declines in home prices at almost -7% or more per year from 2000 - 2007.

With respect to housing prices, Louisville and Indianapolis were in the group that suffered the least serious declines.

While the black population decreased in 5 of the cities, the Hispanic population grew in all 14 Casey investment cities.

Declining in Households with Kids

Households with children continued to decline from 2000 to 2008 for the top 100 as well as Casey metros.

Given the tumult of the past decade, the environment for community improvement initiatives in 2010 remains extremely challenging everywhere. Strategies will have to vary to fit the circumstances. For example, where economies are comparatively strong, the emphasis needs to be on linking neighborhood residents to the jobs being generated.

The late 1990s represented one of the strongest economic booms in America’s history. This was followed by a period of decline in the first two years of this decade, after which the economy shifted into a modest recovery. But then in late 2007 the national economy fell into the most severe recession it had experienced since the 1930s.