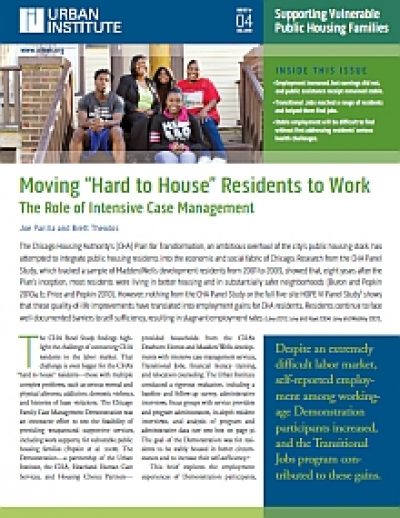 This brief explores the employment experiences of public housing residents during the Chicago Housing Authority’s (CHA) partnership in the Family Case Management Demonstration. The Demonstration was an innovative effort to test the feasibility of providing comprehensive support services, including pre- and post-job help, for fragile public housing families.

“Hard to house” residents are those with multiple complex problems, such as serious mental and physical ailments, addiction, domestic violence and histories of lease violations.

A central goal of the transformation of public housing that began in the 1990s was to help residents become more self-sufficient.

Demonstration participants’ self-reported employment rate increased from 49% in 2007 to 59% in 2009.

While self-reported employment increased for the Demonstration sample, incomes stayed around $10 an hour, leaving most households still living below the poverty level.

The most successful effort was the U.S. Department of Housing and Urban Development’s (HUD) Jobs-Plus program, which sought to connect public housing residents to employment through employment services, rent incentives, and community support for work. Where Jobs-Plus was properly implemented, residents experienced marked employment and earnings increases.