With a Case Study on the East Baltimore Development Initiative 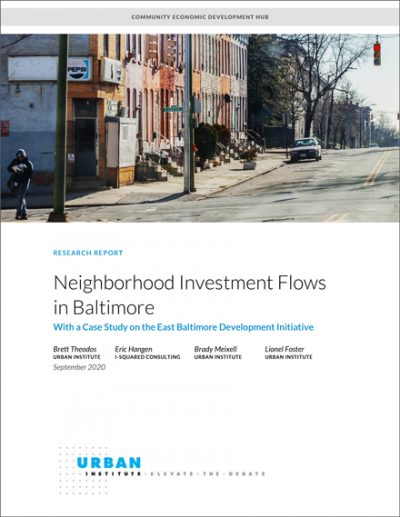 In This Report on Neighborhood Investment in Baltimore, You'll Learn

Longstanding discriminatory policies and persistent, race-based inequities have resulted in Baltimore becoming one of the most segregated cities in the United States. Unfortunately, current neighborhood investment patterns continue to reinforce historic racial and economic inequality.

This study measures neighborhood disparities in private, public and mission capital flows from 2004–2016. Findings underscore the continued impact of Baltimore’s history of racial disparities, with predominantly Black communities receiving significantly less capital flow than neighborhoods that are largely white. In fact, race — more so than poverty rate — often appears to be the strongest indicator of neighborhood investment levels.

Capital flows that reflect the most glaring disparities include: small business loans; commercial real-estate loans; construction, demolition, and property rehabilitation; and loans for both multifamily- and single-family homes. The longer that inequitable neighborhood investment persists, the more difficult it is for Black residents to build wealth and assets.

On a more promising note, the report finds that public spending and mission-driven lending are spread much more equitably across the city. Still, these capital flows represent just a fraction of overall investment, indicating a need for greater government and philanthropic commitments to help spur larger flows of capital into Black communities.

The report concludes with a case study focusing on one major community development project that has boosted capital flowing into one of Baltimore’s predominantly Black communities. The East Baltimore Development Initiative, supported by Casey, is an ongoing project meant to transform a distressed, underserved area into a vibrant, mixed-income community. The study highlights the initiative’s early successes, while also illustrating the need for increased efforts to redirect capital.

As a whole, this report offers research and recommendations to inform the next generation of place-based efforts to spur large-scale community change.

The importance of investing equitably

A Need for Change

Investment patterns such as the lack of small business lending in Black and high-poverty neighborhoods are expected to reinforce concentrated poverty and racial segregation in Baltimore.

Capital flows are distributed unevenly across Baltimore, driven by poverty and especially race.