No Place for Kids Issue Brief 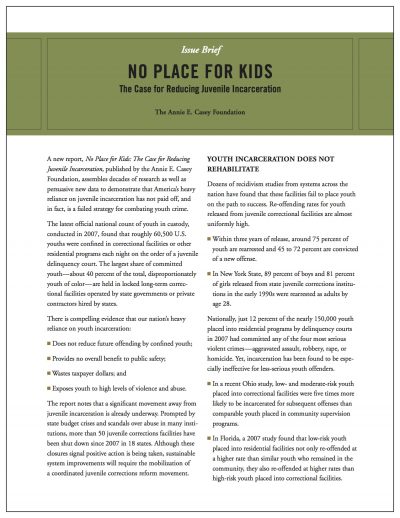 This issue brief provides a summary of a larger report, No Place for Kids: The Case for Reducing Juvenile Incarceration. The report assembles decades of research, as well as persuasive new data to demonstrate that America’s heavy reliance on juvenile incarceration has not paid off and, in fact, is a failed strategy for combating youth crime. Sustainable system improvements will require the mobilization of a coordinated juvenile corrections reform movement.

If states adopt the recommendations and best practices highlighted in No Place for Kids and reallocate funds currently spent on incarceration to more constructive supervision and treatment strategies, there is every reason to believe that the end result will be less crime and more successful futures for America’s young people.

Youth incarceration does not rehabilitate

Within three years of release, approximately 75% of youth are rearrested and 45% to 72% are convicted of a new offense.

In New York State, 89% of boys and 81% of girls released from state juvenile corrections institutions in the early 1990s were rearrested as adults by age 28.

Only 12% of the nearly 150,000 youth placed into residential programs by delinquency courts in 2007 had committed any of the four most serious violent crimes (aggravated assault, robbery, rape or homicide).

In California, the population of incarcerated youth has declined 85% since 1996, yet in 2009, California’s juvenile arrest rate for violent crimes fell to its lowest level since 1970.

The American Correctional Association places the average nationwide cost to incarcerate one juvenile offender at $241 per day or $88,000 per year (in 2008).

In Florida, alternative programs saved an estimated $41.6 million from 2004 to 2008, and produced better results than the typical correctional facilities in terms of rearrests rates.

In 2010 a study found that 12% of confined youth reported being victimized sexually by staff or other youth in these facilities.

The substantial decreases in reliance on youth prisons over the past decade are significant. However, these reductions have neither been anchored in a strong new national consensus among policy leaders, nor based on comprehensive changes to policy, practice, programming, and financing that will be critical to ensure sustainable, effective alternative responses to juvenile crime.

The evidence presented in No Place for Kids makes clear that heavy reliance on juvenile incarceration is a counterproductive public policy for combating youth crime. It is time to act on this information by abandoning the long-standing incarceration model and embracing a more constructive, humane, and cost-effective approach to youth corrections.