A guide to juvenile detention reform 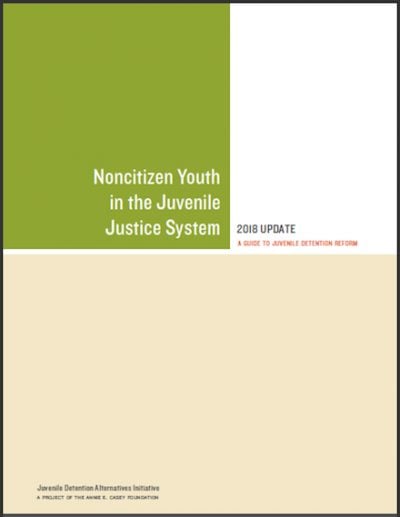 In 2014, the Annie E. Casey Foundation issued a report, Noncitizen Youth in the Juvenile Justice System, aimed at ensuring the safe and fair treatment of noncitizen youth in detention. This update picks up where the 2014 report left off. It tells how subsequent policy changes have impacted youth in the juvenile justice system and offers updated advice on working with noncitizen youth and young people with noncitizen family members. The goal? Arm jurisdictions and individual employees with the information needed to craft policies and procedures consistent with the core strategies of the Foundation’s Juvenile Detention Alternatives Initiative.

Webinar about noncitizen youth recorded on March 15, 2018 on JDAIconnect

The webinar opens with remarks from Nate Balis, director, Juvenile Justice Strategy Group at the Annie E. Casey Foundation. It's moderated by Marcia Rincon-Gallardo, founder and executive director of NOXTIN: Equal Justice for All.

Juvenile justice officials should not honor any ICE detainer or hold requests for youth.

Juvenile justice officials should ensure compliance with all state confidentiality laws before sharing any information with ICE or Border Patrol.

Noncitizen youth involved in the juvenile justice system are at increased risk of arrest, detention and deportation by ICE.