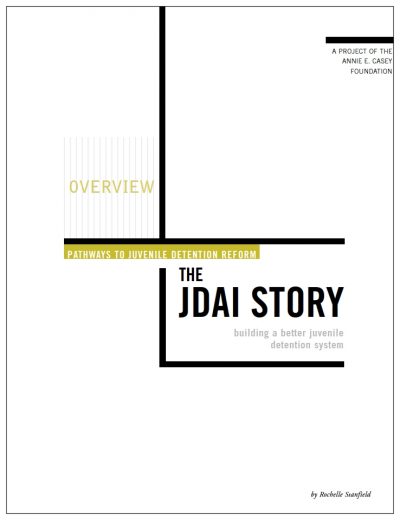 In 1993, 5 counties accepted the Annie E. Casey Foundation’s challenge to commit to radical detention reform. The experiment—called the Juvenile Detention Alternatives Initiative (JDAI)—required a huge political risk, a staff paradigm shift and the development of new procedures and programs to better serve America’s troubled youth. Read their stories, struggles and successes, and find out if the initiative’s growing pains were worth the major effort. (Spoiler alert: The data say yes!)

Overcrowding and deteriorating conditions have crippled juvenile detention centers across the country.

The Main Goal of JDAI

The main goal of JDAI was deceptively simple, yet incredibly difficult to realize: Identify youth who didn't belong in detention and funnel them into cheaper, more effective community-based programs.

JDAI sites proved that it was possible to cut detention center populations without compromising public safety or court appearance rates.

Some of the data-driven successes at JDAI sites include: Faster case processing for kids in confinement, reducing detention center population counts and cutting court no-show numbers.

One important lesson learned during the initiative’s run? High-profile cases involving juvenile crime will cause detention center numbers to spike without fail.

Collaboration—at all levels of government, among agencies, and between managers and staff—was a critical component for successful JDAI reform.

In Cook County, officials developed a sensitive 15-point assessment tool to help identify which youths to divert into a community-based program instead of detention.

In Multnomah County, a local nonprofit opened a 24-hour reception center in a police precinct; this move gave officials an option for temporarily housing youth who didn’t qualify for detention.

In city after city around the country, children picked up for minor infractions of the rules were stuffed into facilities stretched way beyond their seams along with young murderers and rapists.