What We Know About African American Teens

By Joint Center for Political and Economic Studies 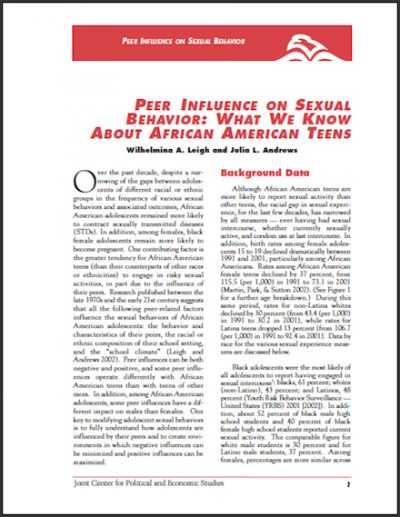 Researchers are studying the bond between peers to better understand sexual behavior in black teens. This report reviews what we know — and all that we still don’t know — about the intersection of black youth, their friends and sex.

More black youth report having sex (61%) than do their white and Latino peers (43% and 48% respectively).

Researchers don't know whether or not existing statistics on sexual activity are applicable to black teens who don’t fit the low-income-urban-youth research mold.

Having peers who exhibit negative behaviors — such as substance use and school truancy — increases the likelihood that a black youth will engage in high-risk sexual behaviors.

Black men were more likely to use a condom in their last sexual encounter (73% did) relative to their white and Latino peers (where the usage rate was 64% and 59% respectively).

The greater the level of spiritual interconnectedness with friends, the less the likelihood of voluntary sexual activity.