Perceptions and Misperceptions of America’s Children

The role of the print media 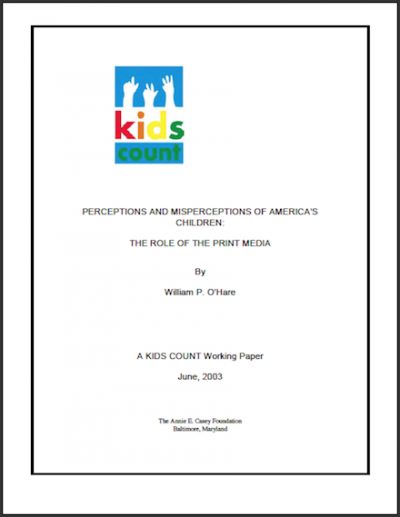 This working paper begins by reviewing where the general public is mistaken about major issues affecting America’s children. It examines one possible source of this misunderstanding — the print media — by analyzing the print content of five major newspapers over a 13-month period.

Only 19% of Americans surveyed knew that the number of kids on welfare declined since 1996.

Just 19% of the public knew that the percentage of kids living in single-parent families had remained unchanged over the last five years and may be starting to drop.

Only 22% of adults surveyed knew that the teen birth rate had declined over the past five years.

Just 38% of Americans surveyed knew that about one in three births were to single mothers.

Only one third of all adults knew that 20% of kids in America were immigrants or children of immigrants.

Assessing public understanding of social issues is critical because perceptions, and misperceptions, are what drive decision making and policy decisions.

Organizations that produce statistical data on children need to be more resourceful and innovative in working with the media.