By the Coalition for Juvenile Justice 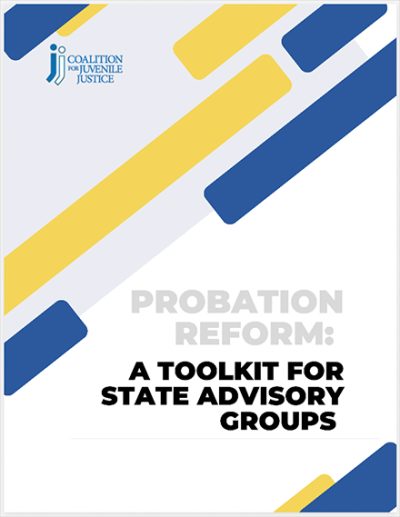 Nationally, probation is the most widely used sanction for young people who come into contact with the youth justice system. However, because of the surveillance-based approach to probation and the high number of conditions placed on many young people, probation can result in young people going deeper into the system and derailing their chances for positive futures. Moreover, there is no evidence that probation practices that rely on lengthy court conditions and compliance-oriented practices are successful in improving youth behavior. In fact, research shows that traditional, surveillance-oriented probation is particularly ineffective at preventing or deterring delinquent behavior, with especially poor results for youth at low risk of rearrest.

States and communities across the country are working to transform probation using new approaches focused on youth development. As jurisdictions look to the possibility of closing youth prisons, many are reimagining the existing probation system in a way that both raises the ceiling and the floor for who is eligible: reducing the number of low-level offenses that result in probation, while opening doors and looking to probation as an alternative in more serious cases. More probation departments are reducing the number of young people placed on probation by expanding and improving available diversion programming. At the same time, communities are looking at probation as an alternative for young people with more serious charges who previously may have been placed in detention or other out-of-home placement.

Diversion efforts have been linked to several benefits including reducing rearrests or reoffending and avoiding deeper involvement with the juvenile justice system. Diversion also helps avoid harms that can come from experiences with the justice system, such as stigma and traumatization.

State Advisory Groups (SAGs) are uniquely positioned within their states to help inform, influence and support policymakers and juvenile justice practitioners as they seek to transform the use of probation. Published by the Coalition for Juvenile Justice, this tool kit aims to help SAGs better understand and support probation transformation.

These are the chapter titles:

This tool kit is designed to help states to:

Placing youth on diversion is linked to multiple positive outcomes.

Research has linked probation alternatives with reductions in rearrests and reoffending as well as avoiding deeper penetration into the juvenile justice system. In L.A., for example, researchers found that 20-30% of young people are charged with another crime after entering the justice system, but that number dropped to 11-15% in cases where young people were placed on post-arrest diversion.

Keeping young people in their community through probation can help them achieve personal growth, create positive behavior change and move towards long-term success.

By taking time to think more deeply about this middle point in the justice system and isolating the use of probation to those young people who need it, we can change the way probation works for our young people to create off-ramps and to help ensure that they get the services and supports they need, instead of being drawn deeper into the system.