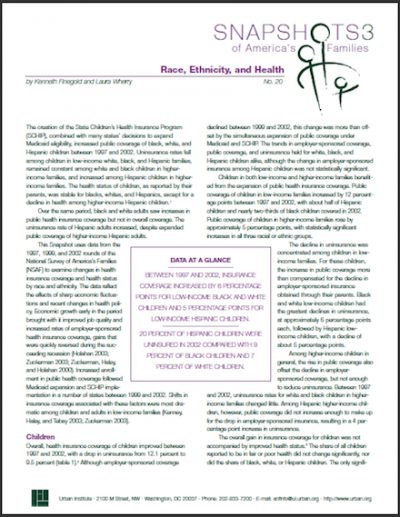 This snapshot uses national survey results to analyze how health insurance coverage rates and health status responses differ by race and ethnicity. It finds that disparities still persist — and that Hispanic kids are faring markedly worse than both their black and white peers.

When it comes to health issues, Hispanic kids face a rougher road than their black or white peers

In 2002, Hispanic kids in both low-income and higher-income families were significantly more likely to be uninsured relative to their white and black peers.

Hispanics are the largest and fastest-growing racial or ethnic minority in the United States, accounting for 13% of the population today and expected to reach 33% by the end of the century.

If policymakers allow the current disparities to persist, the health of the nation may deteriorate as the composition of the population changes.