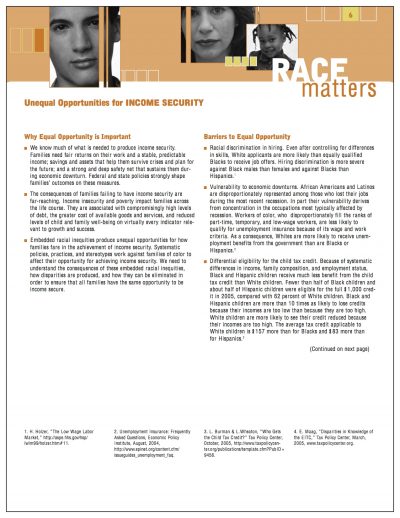 Racism contributes to poverty, even if it is unintended. Eliminating racial bias takes effort.  This brief shows the racial barriers to income security and presents policy strategies to conquer embedded racial discrimination.  This brief  is part of a comprehensive Race Matters toolkit. For more information, visit the Race Matters Institute.

Stereotypes work against families of color to affect their opportunity for achieving income security.

Many workers of color don’t qualify for government unemployment, insurance or tax credits because they fill part-time, temporary or seasonal low-wage jobs.

Because a disproportionate share of workers receiving poverty level wages are workers of color, efforts to preserve the availability of EITC (Earned Income Tax Credit), promote more state EITCs and increase the minimum wage will have disproportionate importance in their collective lives. At the same time, improvements in these areas would bolster income insecurity for all working families.

The EITC now lifts more children out of poverty than any other government program. The child tax credit could be extended to more low-wage workers, as well.