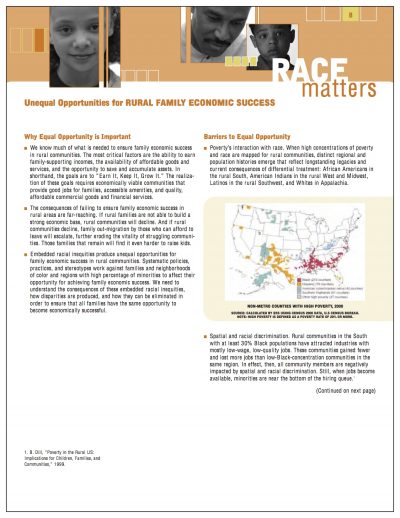 Economic impact laws that appeared race-neutral have had significant impact on poor people of color in rural areas. Racial equity can only be attained if regional discrimination and unintended bias is addressed. This 2006 fact sheet brings awareness to the rural economic issue, shows the consequences of unintended bias and discriminatory actions and presents policy strategies to tackle the issue. This brief is part of a comprehensive Race Matters toolkit. For more information, visit the Race Matters Institute.

Longstanding racial bias in the United States can be traced to specific areas: blacks in the South, American Indians in the West, Hispanics in the Southwest and whites in Appalachia.

80% of rural areas lacked public transportation at the time of this report, a huge economic obstacle to poor minority residents.

Collecting and analyzing data to determine if discrimination is occurring is a critical first step toward disparities reduction because it makes concrete what the issues are. As a result, dialogue about race can be action-focused.

Some propose a national report card on racial and ethnic discrimination to, among other goals, assess the extent to which discrimination undermines the achievement of important social policy objectives like welfare reform and asset accumulation for low-income minorities.