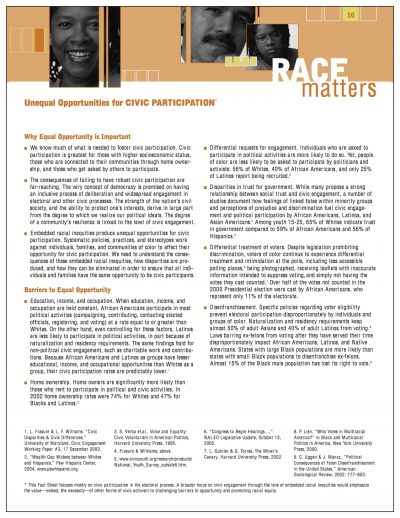 Civic participation is greatest among those with money who own homes and get asked by others to volunteer.That usually leaves most communities of color behind in the political volunteering arena. This 2006 fact sheet brings awareness to the racial side of community volunteering and shows the consequences of not being involved in your community or the political process. This brief is part of a comprehensive Race Matters toolkit. For more information, visit the Race Matters Institute.

How different races participate in their communities

Over half of the votes not counted in the 2000 Presidential election were cast by blacks, who represented only 11% of the electorate.

In 2004, blacks who volunteered gave the greatest number of hours, with religious organizations being the likely recipients of their time.

Religious organizations were also the greatest recipients of volunteering by whites and Asians.

Latinos gave the most time to education and youth services.

Passage of the 1965 Voting Rights Act and its subsequent amendments have significantly increased electoral participation by racial and ethnic minority groups.

Homeowners are significantly more likely than those who rent to participate in political and civic activities. In 2002, home ownership rates were 74% for whites and 47% for blacks and Latinos