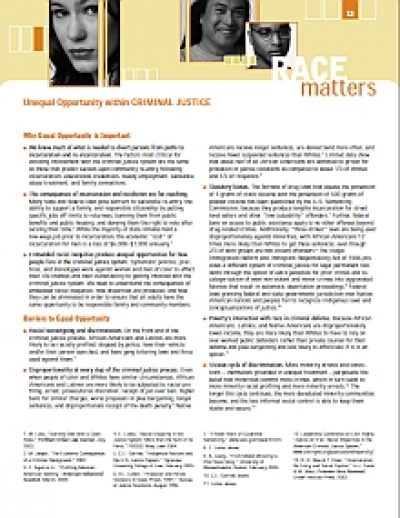 Racial equity is not easy to attain if intentional and unintended bias are not addressed. This 2006 fact sheet brings awareness to the racial profiling issue in the criminal justice system, shows the consequences of unintended and unchecked actions, and presents policy strategies to mitigate the problems and bring equal opportunity to all. This brief is part of a comprehensive Race Matters toolkit. For more information, visit the Race Matters Institute.

Working class, low-income urban minority neighborhoods were the most likely to be impacted by arrest, incarceration and re-entry

The consequences of incarceration on poor, minority adults are lasting and reach far into the community.

Blacks, Latinos and Native Americans had to rely more on over-worked public defenders, worse plea bargains and no bail they could afford than whites who could pay for better treatment.

Even when people of color and whites had similar circumstances, blacks and Latinos were more likely to be racially profiled. They would be stopped by police, have their vehicle and person searched, and have gang loitering laws and force used against them more often than whites.

Collecting and analyzing data to determine if profiling or discrimination is occurring is a critical first step toward disparities reduction.

When the U.S. Customs Service saw that 43% of people it searched were minorities but found illegal material on 7% of whites, 6% of blacks and 3% of Latinos, it decided to focus searches on suspicious behaviors rather than race. As a result, it conducted 61% fewer searches while increasing its seizure of cocaine, heroin and ecstasy.