Derived from the National Survey of Child and Adolescent Well-Being

By the Annie E. Casey Foundation, Casey Family Programs, Center for the Study of Social Policy 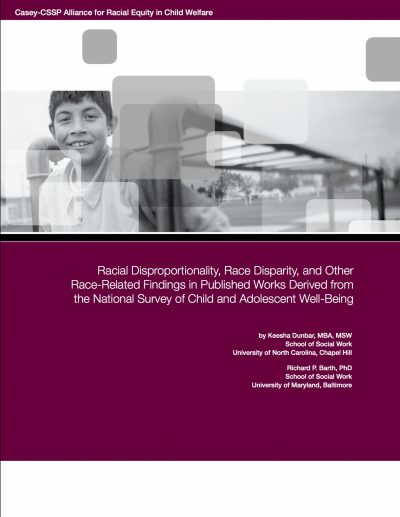 To examine the racial disproportionality in child welfare, this report draws on peer-reviewed papers and chapters from data gathered during the National Survey of Child and Adolescent Well-Being (NSCAW). Topics include child factors and related services, including early childhood development and early intervention services, as well as mental health and substance abuse treatment needs and access; parental factors and related services, including parental arrest and child involvement with child welfare services agencies, as well as domestic violence; and reunification and related services.

The Role of Race and Ethnicity in Child Welfare

Black children are less likely to receive services than white children; these racial inconsistencies in services received remain even after controlling for need.

As a group, African American youth do not demonstrate greater mental health problems than other children; but there is a significant unmet need among the 6- to 10-year-old age group who are less likely to receive mental health services than white youth when other variables are controlled.

African American children with incarcerated parents were found to be overrepresented in the proportion of investigated cases with a recent arrest. Yet the risk factors identified by child welfare workers at the time of intake were lower among African American parents who had been arrested than among other arrested parents.

For children younger than 7 months and older than 10 years, racial differences are significant. For example, African American infants are less likely to experience reunification than white infants; and African American youth over age 10, as well as youth of other racial and ethnic groups, are significantly less likely to return home than white youth.

The race/ethnicity of children is associated with behavior problems and, for some age groups, to a disparity in receipt of mental health services. Even when African American youth age 6–10 displayed a high level of need, they were found to have a significantly reduced likelihood of receiving mental health care than children of other races or ethnicities in their age group.