Ranking States on Improvement in Child Well-Being Since 2000 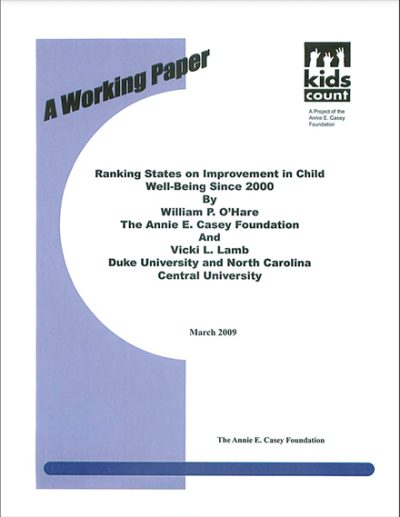 The KIDS COUNT® Data Book uses ten key indicators to consistently measure the educational, social, economic, and health status of children on a state-by-state basis. These indicators are reported individually and used collectively to rank states in terms of absolute child well-being. The KIDS COUNT measures reflect a range of experiences from birth through early adulthood, and they are consistently measured over time and across space — permitting legitimate comparisons across states.

Findings show that — nationwide — child well-being generally improved from 2000 to 2005. However, the report explores the significant variation found across states and across indicators. Among the states that improved the most, no regional patterns were detected. Conversely, the report highlights several characteristics shared by those states that showed the most decline.

The report notes that year-to-year changes are often quite small, and gains made during one year are often negated by declines the following year. Therefore, by focusing on a five-year span, this report reflects solid, reliable data and paints a more definitive picture of child well-being across states.

The overall improvement from 2000 to 2005 was due in large part to big gains made in certain indicators: the high school dropout rate and the teen birth rate. These gains counter-balanced the small declines in four other indicators: low birth rate, underemployed parents, child poverty rate, and children in single-parent families.

A Closer Look at the Lowest-Ranked States

Maine, North Dakota, South Dakota and Vermont showed the most decline, as all of them deteriorated by 10% or more. While there is some geographic variation, these states are all relatively rural, which underscores the economic problems faced by many rural communities since 2000.

Putting it in Perspective

The modest improvement in child well-being from 2000 to 2005 stands in stark contrast to large improvements seen in the 1995 to 2000 period, when a similar index rose by 12 points.

Comparing the rank from one year to the next does not reflect absolute improvement (or deterioration) because the ranks are always relative to other states…It is important to recognize that the well-being of children in states may be improving even though there is no change in relative rank.

Looking at longer-term trends, there was little consistency among states that performed the best or the worst in terms of improvement. We believe this is related to the relatively small differences across the states in terms of changes over time.