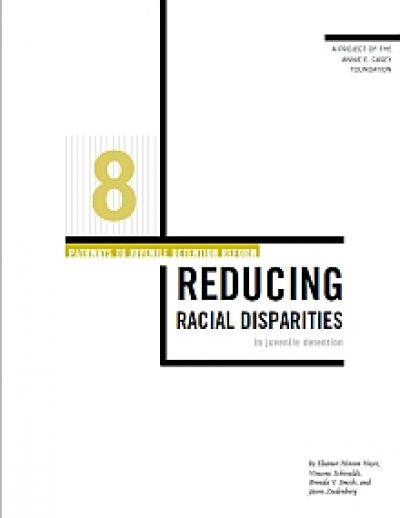 This report—the 8th installment in a series devoted to revolutionizing detention programs and practices in America—explores racial disparities in confinement and outlines how we can create a fairer juvenile justice system for today’s youth of color. It recaps the journeys of 4 distinct sites from across the country that committed to reducing racial disparities in juvenile detention as part of Casey Juvenile Detention Alternatives Initiative (JDAI). Readers will learn relevant statistics and background information for all 4 locations as well as each jurisdiction’s unique reform strategies, successes and challenges.

To help sites determine if their reform efforts had successfully reduced DMC, JDAI spelled out 2 measures of success: 1. Detention rates drop among youth of color; 2. Fewer youth of color in detention.

Despite facing challenges, JDAI sites adopted a variety of effective and innovative solutions.

Jurisdictions should adopt a pro-action approach focus on targeting only the things that you can control and change within the detention system.

Multnomah County, Oregon, is the model to follow for jurisdictions seeking to remedy the disproportionate dominance of youth of color in detention.

In Santa Cruz, California, the probation department successfully reduced both the number of Hispanic youth in detention and the rates at which they were detained by creating a simple 23-goal checklist to guide their actions.

It is impossible to talk about juvenile detention reform without talking about the disproportionate confinement of youth of color.

Juvenile detention reform efforts must reflect the reality that youth of color bear the brunt of policies that lead to the arrest, processing, detaining, adjudication and imprisonment of young people.

On every indicator of social well being, whites are better off than African Americans, Hispanics, Asians or other minorities.

Within Cook County in 2000, 99% of the youth tried as adults for drug crimes were African American or Latino.