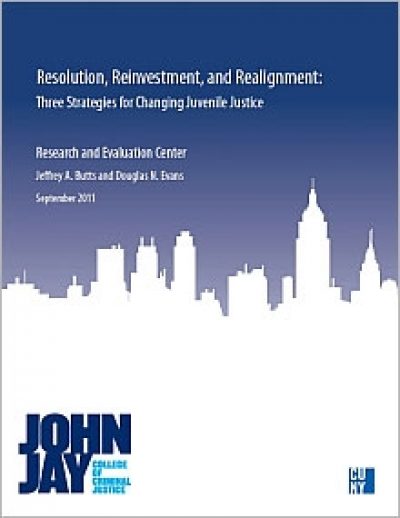 Putting kids behind bars is more a local policy choice than an actual safety issue. What lawmakers do depends not only on budgets and safety, but on the political climate. And that differs drastically from state to state. Down-sizing corrections is a growing strategy as falling crime rates allow lawmakers to focus on cost-effectiveness and the impact of juvenile justice policy. This report reviews the history and development of three juvenile justice reform strategies and analyzes their impact on policy, practice and public safety.

Incarceration does not reduce recidivism and may aggravate problems with school, work and behavior.

The organizational subculture of confinement may actually breed violence rather than suppress it.

Reforming the juvenile justice system too aggressively or too rapidly may encourage justice officials to place youth in the adult system -- an even worse alternative.

The average cost of incarcerating one juvenile in a state facility may reach $100,000 per year and has gone as high as $250,000 per year.

The reform strategies documented in this report may be received differently by small and large communities. Large cities often favor such reforms because they have the resources to operate their own, independent juvenile justice systems, complete with secure placement options. Smaller towns and rural areas, on the other hand, may not have the resources to provide appropriate interventions for every type of youthful offender. They need support from the state.

State and local governments in the United States draw upon an array of sanctions, services, and supports for youthful offenders. Of all possible choices, the most consequential and expensive is secure confinement.

Placing young offenders in secure facilities is an effective means of controlling their behavior for a short time, but its long-term impact is uncertain and research suggests that the unintended consequences may outweigh the benefits.