Progress in Detroit and Baltimore 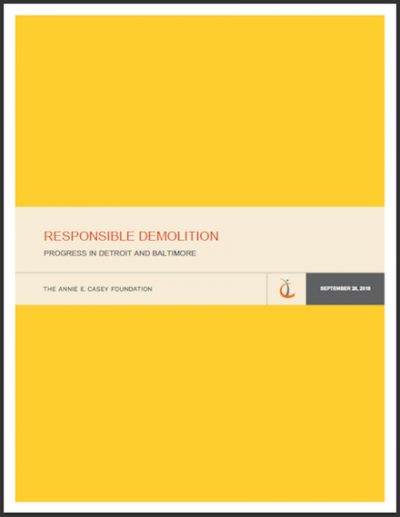 This brief — focused on redevelopment efforts in Detroit — tells how the city looked to Baltimore to develop responsible demolition protocols and deconstruction practices that both protected the environment and spurred job growth.

From urban blight to a community benefit

Four years after the end of the Great Recession, the Detroit Land Bank Authority owned nearly one-quarter of the 388,000 land parcels throughout the city — and approximately 30,000 of them included vacant buildings.

In Detroit, a working group generated recommendations, which were later adopted, that focused on three key areas: 1) wet-wet demolition; 2) community outreach; and 3) enforcement.

Detroit has demolished more than 14,100 properties since the start of the expanded demolition efforts in spring 2014.

We were committed to doing this the right way. There was a huge amount of need and demand from the community, but we knew we had to do it in a manner that would protect residents’ health and safety.

A deconstruction project typically creates six to eight times as many jobs as a traditional demolition project.