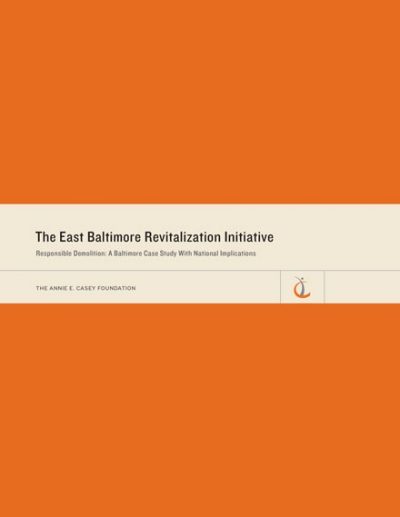 Lead poisoning leads to crippling mental and physical health effects. Lead-based paint in older homes becomes a toxic dust storm when whole neighborhoods are demolished for new growth. Yet, nowhere in the United States were there any construction protocols minimizing health risks during building demolition. That is, until 2004 when the Annie E. Casey Foundation and Johns Hopkins University took East Baltimore, Maryland, resident concerns to heart and created a whole new rulebook. The people involved in this project tell their story in this report.

Any building redevelopment should not expose residents to physical health hazards.

Lead infused dust levels in East Baltimore were 40 times higher during housing demolitions before the protocols were enacted.

East Baltimore already had one of the highest levels of childhood lead poisoning in Maryland.

In 2007, Baltimore became the first city in the nation to adopt demolition standards specifically aimed at suppressing lead dust exposure.

In the summer of 2004, an intern with the Baltimore City Department of Housing and Community Development surveyed public works officials from a dozen cities across the country and found that none had established rules or protocols for demolition to minimize the spread of lead dust.

Nor had any other city adopted protocols to address the other health hazards posed by demolition, including asbestos, rats and other vermin, and nontoxic dust that can exacerbate asthma and other respiratory problems.