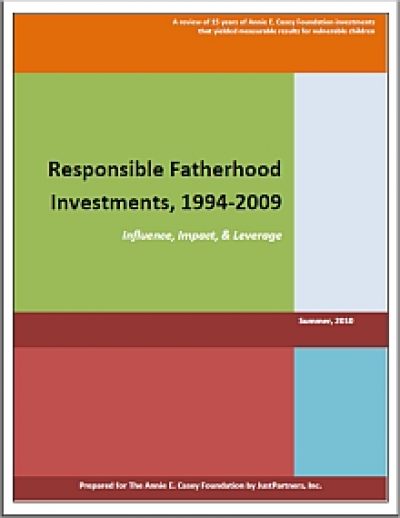 Now we know children need fathers to thrive. But two decades ago, fathers were slipping off the radar and out of kids’ lives.  In the face of the foregoing, the Casey Foundation set out to provide leadership in an effort to change the policy environment and improve child outcomes through better fathering. The Foundation sought to help promote large-scale programs and policy commitments that could change the attitudes and behaviors of young men. Those efforts, theories, challenges and social-shift accomplishments are presented in this report.

Fathers matter for families because they play an essential role in child development and family economic success.

One conservative estimate is that father absence costs taxpayers $100 billion per year.

Today, more Americans agree that fathers play a critical and indispensible role in the rearing of their children.

The Affect of Fathers

When fathers are involved with their kids, they perform better in school, have higher self esteem, are less aggressive, and are less likely to engage in drugs.

Young fathers are more likely to develop vocational plans and obtain employment when they are involved with their kids.

More and more, there was talk of a "fatherhood movement" -- and the Annie E. Casey Foundation was central to its birth and rearing.

….critical bipartisan support for the movement was nurtured and sustained, resulting in a significant focus on fatherhood by the Clinton, Bush and Obama administrations alike as well as by both Democrats and Republicans in the U.S. Congress.

Programs and services for fathers are no longer an oddity. Public policy is no longer ambivalent about the importance of father involvement. Healthy marriage is part of the public debate. And the Annie E. Casey Foundation is still here.