By the Annie E. Casey Foundation, Half in Ten 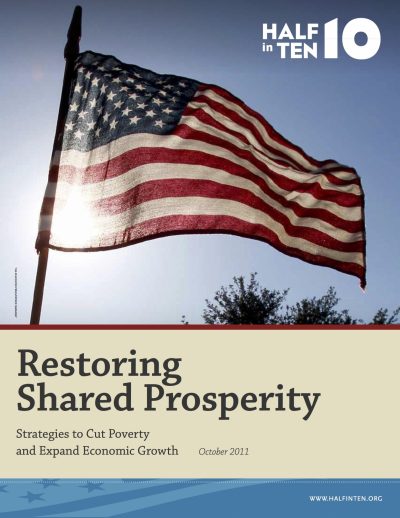 Launched in 2008, the Half in Ten campaign aims to cut poverty in half over a 10-year period through three major initiatives: raising the minimum wage, making the tax code work better for low-income families and empowering workers who are eligible for child care services. This report looks at the economic challenges facing families in the United States and outlines a set of priorities for addressing these challenges.

A Matter of National Interest

It’s often said that “the poor will always be among us,” and that there is little government can do to address poverty. But between 1964 and 1973, the U.S. poverty rate fell by nearly half as a strong economy and effective public policy initiatives expanded the middle class; and between 1993 and 2000, shared economic growth combined with policy interventions (e.g., enhanced earned income tax credit and minimum wage increase) cut child poverty.

While families positively prevent individual members from falling into poverty, the reverse can also be true – and divided families share less in one another’s financial and emotional resources, affecting children and making it more difficult to lift them out of poverty. As such, effective anti-poverty efforts must support and strengthen the family unit.

Key ways that policymakers can promote family economic security among working-age adults and their children include strengthening work supports for low-wage earners; providing adequate income support to the unemployed; and promoting savings and asset development.

Half in Ten’s five indicators to measure the nation’s progress in helping more families become economically secure include the participation rate in SNAP (Supplemental Nutrition Assistance Program) among those who are eligible; the percentage of eligible children receiving child care subsidy; the percentage of unemployed receiving unemployment insurance; the percentage of the population that doesn’t have checking and savings accounts; and the housing affordability gap.

There is nothing new about poverty. What is new, however, is that we have the resources to get rid of it.

What would it mean to cut poverty in half across the United States? In concrete terms it would mean 23 million fewer Americans living in poverty. It would mean more consumers for American goods and services to help us rebuild our economy from the bottom up. It would mean more children going to school well fed and ready to learn. It would mean a healthier population, less crime, and a major decline in the racial inequities and disparities that plague our nation. And it would mean a more competitive America with greater opportunity for all its citizens.