Why Ohio, Why Now

By the Children’s Defense Fund – Ohio 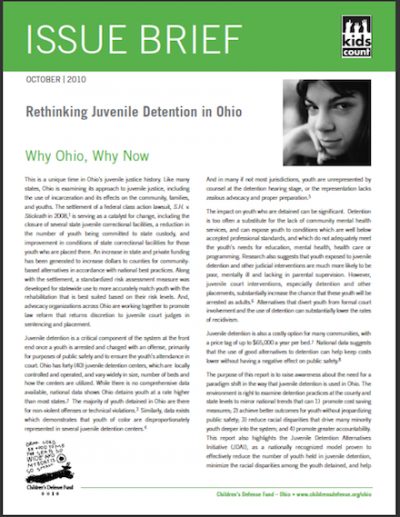 This issue brief reviews juvenile detention program data for Ohio and the nation. It outlines the successes of Annie E. Casey’s Juvenile Detention Alternatives Initiative (JDAI), talks about Ohio’s participation in the initiative, and shares four recommendations aimed at dramatically altering the state’s use — and overuse — of juvenile detention.

Ohio is in the midst of significant juvenile detention reforms; here’s where the state needs to focus next

Ohio detains youth at a higher rate than most states — and mostly for technical or non-violent offenses.

Juvenile detention is a costly option for many communities, with an annual price tag of up to $65,000 per bed.

Youth of color represent 41% of the U.S. population, yet make up more than 67% of detention center placements.

A Foundation for Failure

Youth held in juvenile detention for minor offenses were seven times more likely to be arrested or incarcerated as adults compared to youth who were diverted from the juvenile court system.

Ohio detention centers spend between $60 and $136 per youth each day. Alternatives to detention are more economical, costing as little as $3.75 to $50 per day.

The average daily population in America’s publicly operated detention centers jumped about 72% between 1985 and 1995.

In the fall of 2010, five of the largest urban Ohio counties are slated to begin to examine their detention practices through implementation of JDAI.