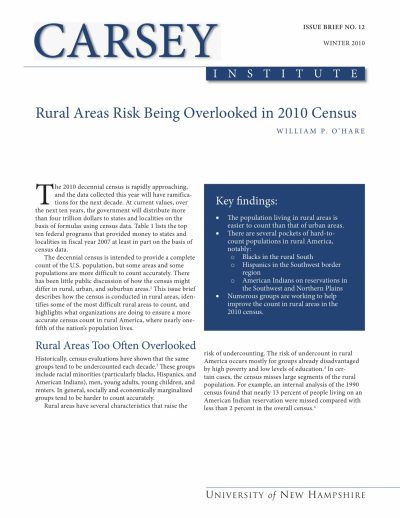 This report draws attention to the U.S. Census Bureau's undercount of rural areas, especially among minority populations with high poverty rates and disproportionately low levels of education. Key findings highlight seasonal employment and other reasons for the undercount, which keeps these communities from receiving their share of public funds.

People already disadvantaged by high poverty and low levels of education are most at risk of undercount.

Blacks were the majority population in 41 of the top hardest-to-count rural counties.

Rural counties that have the least resources are most in need of help from the U.S. Census Bureau.

There is a sharp racial overlay to the hard-to-count rural areas. Without special attention, the population in these areas is in jeopardy of being undercounted in the decennial census, which means they will be deprived of their rightful share of political power and government resources.

Since data from the 2010 decennial census will be used for the next decade, mistakes made now will have consequences for years to come.