Protecting Families and Our Economy from Bad Budget Choices

By Coalition on Human Needs 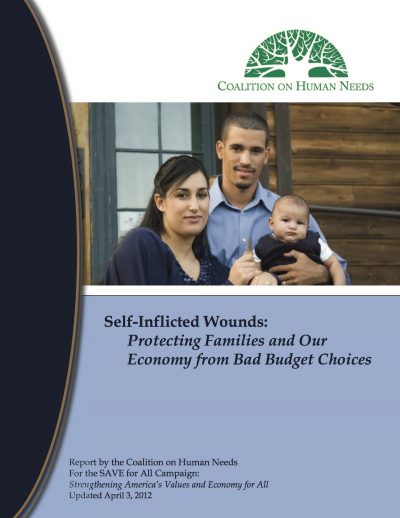 The Budget Control Act of 2011 mandated automatic spending cuts for the federal government to go into effect January 2013. This report compares the Budget Control Act’s mandatory cuts with the House leadership budget proposal, the Congressional Progressive Caucus proposed budget and President Obama’s budget and the effect each will have on the wealthy, the poor and the middle class in America. The report dissects each budget on several issues and concludes devastating consequences for the underprivileged “fiscal safety net” if these cuts go into effect.

Budget cuts will increase over the next decade

This (2009) recession reminded us that no one is protected from a bad economy or personal misfortune.

The mandatory cuts will have a devastating effect on programs that for decades have helped families move out of poverty.

Close to half of Americans (43%) have so little savings that they will fall into poverty within three months if faced with a job loss or medical crisis.

As the nation emerges from the recession, we must invest in resources that rebuild a strong economy and provide opportunity for all―not just the most privileged.

As a nation, we cannot renege on our responsibility to protect society’s most vulnerable― young and old, with disabilities or in fragile health.

Economists predict it will take years to return to pre-recession levels. One hundred million people live below twice the poverty line, and 46 million are poor.