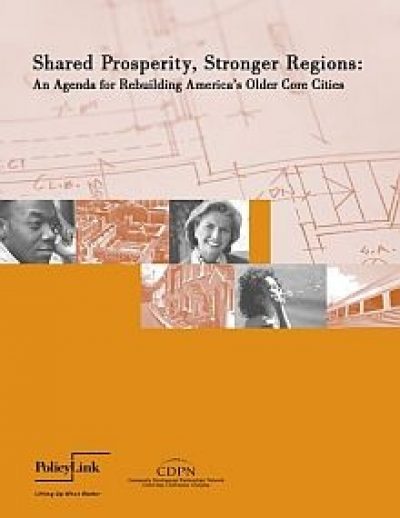 This report presents a framework for change to forge a more equitable and inclusive society, focusing on America’s older centers that face obstacles to realizing a sustainable economic future. These places struggle to reposition themselves in a changing economic landscape characterized by the movement of people and resources to other regions, both domestically and overseas.

This migration of resources and capital left behind abandoned and disinvested neighborhoods where residents lack meaningful access to economic and social opportunities. Even older suburbs are beginning to see similar trends and feel the same strains. As the problems spread, the people with the fewest resources are left without opportunities, and the entire region is left floundering to compete and grow economically.

This report explores the opportunities and challenges confronting older core cities by looking closely at five through extensive research, interviews and comprehensive analysis. Through examining innovative practices and policies, this report offers a set of strategies to encourage stable regional growth.

Sprawl is a Problem

As of 1996, less than one out of every five jobs was located within three miles of the central business district in Baltimore, Cleveland, Detroit and Philadelphia.

Deindustrialization – the movement of manufacturing firms to suburban locations, the Sunbelt, and over-seas – has left older core cities struggling to compete in an economy that is increasingly globalized and drive by technology and services.

The centers of growth and development have shifted to newer suburbs, which have evolved from bedroom communities into economic engines fueling job expansion.

In Baltimore, Cleveland, Detroit and Philadelphia, city households earn only 60% to 65% of the regional median income. This is largely due to economic stagnation and sprawl, which lead to neighborhood decline, depopulation, and a weakened urban economy.

Historic federal housing policies subsidized sprawl and hastened the decline of urban neighborhoods by insuring low-interest mortgages for white in the suburbs while “redlining,” or barring investment in minority neighborhoods.

The fragmented structure of government support for cities creates disproportionate funding of neighborhoods and bureaucratic silos that bottle-neck reform. State and national politics are now dominated by suburban interests.

The Building Blocks are There

Older core cities are home to more educational and medical institutions, advanced manufacturing industries, transportation and infrastructure, unique neighborhoods, as well as cultural and historical resources. All of these can blend into an opportunistic platform for today’s knowledge-based economy.

All neighborhoods across the region need to be communities of opportunity by providing access to living-wage jobs, proximity to good transit, good schools, diverse housing choices, and important services and amenities such as supermarkets, cultural centers and parks.

Revitalizing older core cities – and reversing decades of stagnation and inequity – will require innovation, creativity and commitment to inclusive and sustainable growth. For regions to achieve their full economic potential, all residents must contribute to and benefit from regional growth and development.

Building a society where everyone participates and prospers calls for thoughtful and deliberate strategies that promote growth with equity – not growth at any cost.