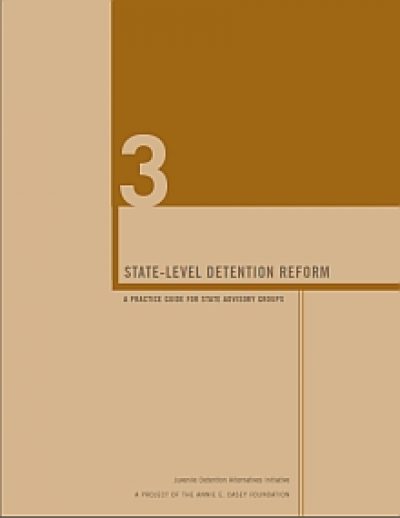 This practice guide is specifically aimed at State Advisory Group (SAG) members who advise and guide the implementation of the federal Juvenile Justice and Delinquency Prevention Act (JJDPA), offering recommendations, case studies and examples of ways to generate and lead an effective detention reform effort. The guide uses Casey’s JDAI reform efforts as examples of what can be accomplished and the results being achieved.

Placing kids behind bars while awaiting a hearing or an out-of-home placement is both stigmatizing and harmful.

States' over-reliance on throwing kids into secure detention is a growing public expense.

Most jurisdictions lack objective criteria and screening tools to accurately identify which youth really pose significant risks. Youth who are detained, some of whom will have all charges dropped, are more likely to have difficulty transitioning back into community, home, and school settings…

Many communities face huge new public expenditures for detention at a time when tax revenues and allocations of federal, state and local juvenile justice funding have been sharply cut.

Another way SAGs can promote detention reform is to increase public awareness and support for change. SAGs can increase awareness through dissemination of data, effective message development, media outreach, and recognition of accomplishments.