By The Aspen Institute Roundtable on Community Building 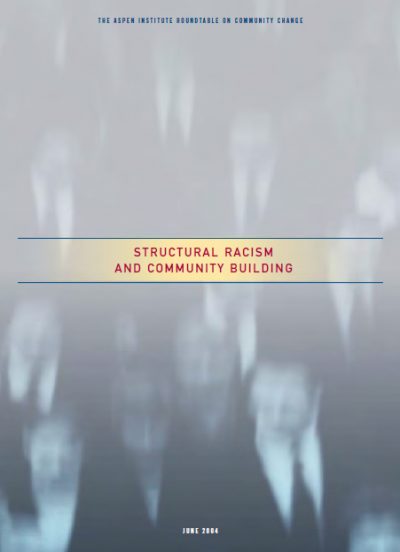 This publication summarizes the Aspen Institute Roundtable’s perspective on racial equity in the United States. The conclusion? Even with the strides made, race continues to shape political, economic and cultural life. This report offers insights into integrating a racial equity perspective throughout the work of community building and socioeconomic justice.

White Americans remain significantly more likely than racial minorities to have access to what it takes to succeed in life, and to be rewarded fairly for their efforts.

Data from the 2000 U.S. Census show that a person of color is nearly 3 times more likely to be poor than a white person.

Although federal legislation barring racial discrimination was passed in 1964, racial and ethnic groups are still largely isolated from one another in contemporary America.

Children of homeowners are less likely to drop out of school, get arrested or become teen parents than are children of renters.

Statistics of the American population broken out by race show disparities between people of color and white Americans in almost every quality of life arena, the most basic being employment, income, education and health.

Racism in twenty-first century America is harder to see than its previous incarnations because the most overt and legally sanctioned forms of racial discrimination have been eliminated.

These facts alone make clear that our national effort to promote a just society and vibrant democracy is not likely to succeed without an honest and unflinching appraisal of the role that race plays in all of our lives.

In the past century, groups such as the Irish, Italians and Jews in America started low on the socioeconomic and political ladder and “became white” over time.

The structural racism framework posits that raising the profile and centrality of racial equity will increase the likelihood that community builders will succeed in improving the well-being of children, families and communities.